BTEC Extended Diploma in Performing Arts in Association with Joseph 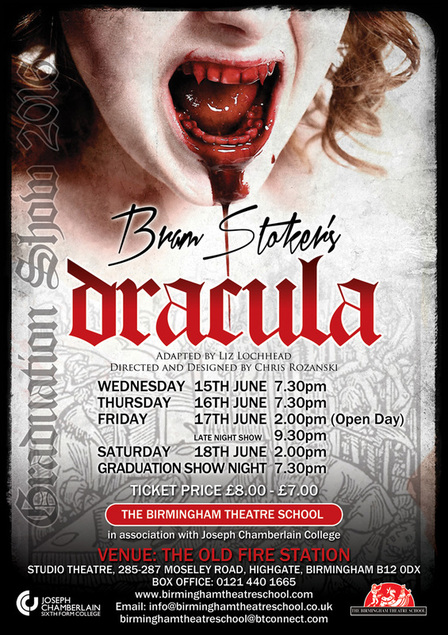 Our BTEC EXtended Diploma 2nd years are coming to the end of their 2 years and they are going out with a bang by performing Bram Stoker's Dracula for their graduation show.

A young Englishman named Jonathan Harker travels through Transylvania on a business trip. He is there to aid Count Dracula, a Transylvanian nobleman, in buying an English estate. His journey into the remote Eastern European landscape is fearsome, although initially he is charmed by the Count's generosity and intelligence. Gradually, he comes to realize that he is a prisoner in Dracula's castle, and that the Count is a demonic being who plans to prey on the teeming masses of London. Dracula leaves him to die at the hands of three female vampires, but Jonathan attempts a desperate escape...


This year there will be a special late night showing of this production on Friday 18th June at 9.30pm