Here are links to picture galleries for Graduation shows the school has presented over the last 10 years! :- 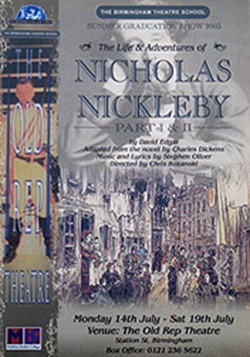 Synopsis: After the death of his financially replete father, Nicholas Nickleby and his family travel to London to seek assistance from his father's older brother Ralph. Taking an immediate dislike to his nephew, Ralph employs Nicholas under the sadistic Mr. Squeers and his interminable wife, owners of a boys' school in northern England. In the meantime, Ralph seeks to use Nicholas' beautiful sister Kate as a ploy to influence his investors. Discourse forces Nicholas to flee the school with the crippled Smike, an orphan with no memories of his former life before he was brought to Dotheboys' Hall. On their journey back to London they meet up with Vincent Crummles and his acting troupe, befriend Ralph's good-hearted secretary Newman Noggs, and ultimately rise over adversity. 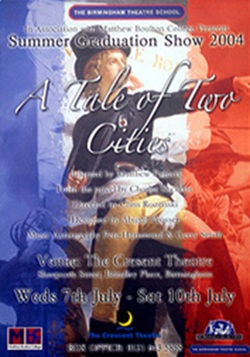 Synopsis: In 1775, Mr. Jarvis Lorry, an official of Tellson's Bank in London, accompanies Lucie Manette to Paris. He has information that her father, Dr. Alexandre Manette, who had disappeared eighteen years ago, is alive. He had been wrongfully imprisoned in the Bastille and left there to die. Lucie is shaken when she learns that her father is still living. On reaching Paris, they go to the house of Monsieur Defarge, a wine-seller. He had been Dr. Manette's servant and has taken care of him after his release from prison. Both Mr. Lorry and Lucie are shocked to see the terrible state Doctor Manette is in. He has aged prematurely, having lost both his memory and his sense. He spends his time cobbling shoes. The revolutionary ardor and hatred against oppression are fanned every time Defarge and his associates look at this wreck of a man, who has been a victim of the aristocracy. Mr. Lorry and Lucie take her father back to London. With love and compassion, Lucie plans to nurse her father back to health and sanity. Read more...

Click here to see photos from A Tale Of Two Cities! 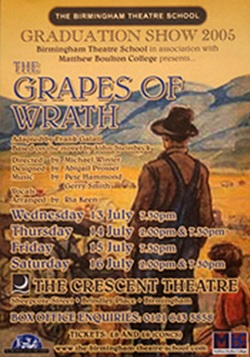 Synopsis: The Grapes of Wrath is the story of the experiences of the Joad family from the time of their eviction from a farm near Sallisaw, Oklahoma to their first winter in California. The novel has little plot in the ordinary sense. It has thirty chapters, fourteen of which deal with the Joad story. The other sixteen chapters, called interchapters, are not part of the narrative about the Joads. They are, instead, essays dealing with the larger significance of the situation in which the Joads find themselves. These chapters utilize the material that Steinbeck had found in his visits to the migrant camps and his observations of the general situation of drought and depression.

Click here to see photos from The Grapes Of Wrath! 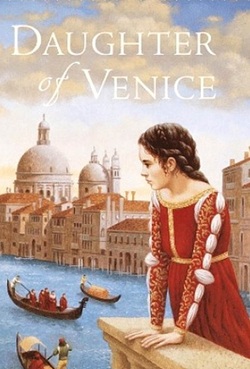 Synopsis: Set in 1720 Venice this romantic and poignant comedy embraces are large cast of both graduating and in-house students of the school. The daughters of the title are young girls taken in as orphans and cared for by the sisters of the Pieta. The convent is famous for its gilrs orchestra, which under the guidance of Vivaldi has become the greatest in the world. Set at Carnival time in Venice, the play follows the fortunes of three girls, who having reached the age of twenty, must decide to make their way in the world. Full of rich comedy and powerful drama, the play addresses questions of how to survive in a harsh commercial world that are as relevant today as they were in 18th century Venice.

There are no photos from this production yet, but if you have some and you wish to add them to the website, please contact us! 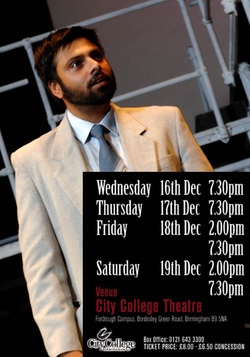 Synopsis: Originally written for a cast of over a hundred and fifty, Heartlanders was commissioned to celebrate the Centenary of the city of Birmingham as collaboration between 3 regionally based writers, Stephen Bill, Ann Devlin and David Edgar and the Birmingham Rep Theatre in 1989. The play follows the fortune of 3 individuals as they explore the city.  Tom from South Wales is searching for an old flame, Margaret from Oswestry is trying to trace her missing daughter and Aan from India has marriage in mind. 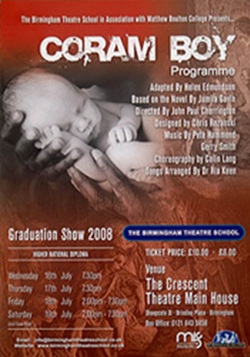 Synopsis: Otis takes babies and money off desperate mothers, promising to deliver them to the Coram Foundling Hospital in London. Instead, he murders them and buries them by the roadside, to the helpless horror of his mentally ill son, Mish. When Melissa, beloved of Alexander Ashbrook and daughter of his governess becomes pregnant by him, her mother arranges for the Otis to take the child, telling Melissa it was stillborn. Alexander, not knowing Melissa's condition, has fled his home for a career in music. But Mish manages to save Melissa's baby, Aaron, and he grows up with Toby, the son of an African slave, inseparable friends. Toby is a plaything at the house of rich Mr Gaddarn, who is, in fact, Otis. When Mish sees Aaron and Alexander together, and realises the family link, he takes Aaron and Toby to Otis, who rejects them. A way must be found to rescue them, but a great friend must die before the family can be reunited.

Synopsis: War and Peace opens in the Russian city of St. Petersburg in 1805, as Napoleon’s conquest of western Europe is just beginning to stir fears in Russia. Many of the novel’s characters are introduced at a society hostess’s party, among them Pierre Bezukhov, the socially awkward but likeable illegitimate son of a rich count, and Andrew Bolkonski, the intelligent and ambitious son of a retired military commander. We also meet the sneaky and shallow Kuragin family, including the wily father Vasili, the fortune-hunter son Anatole, and the ravishing daughter Helene. We are introduced to the Rostovs, a noble Moscow family, including the lively daughter Natasha, the quiet cousin Sonya, and the impetuous son Nicholas, who has just joined the army led by the old General Kutuzov. Read more...

CLICK HERE FOR THE "WAR & PEACE" - BEHIND THE SCENES DOCUMENTARY. 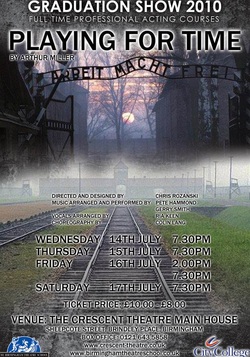 Synopsis: Fénelon, a Jewish singer-pianist, is sent with other prisoners to the Auschwitz concentration camp in a crowded train during World War II. After having their belongings and clothes taken and their hair cut short, the prisoners are processed and enter the camp. Fénelon is recognized as being a famous musician and she finds that she will be able to avoid hard manual labor and survive longer by becoming a member of the prison's female orchestra, Women's Orchestra of Auschwitz.  In the process, she strikes up a close relationship with Alma Rosé, the musical group's leader, as well as the other members of the band. Realizing that the musicians get better treatment than other prisoners, Fania convinces the guards and members of the orchestra that another prisoner she had befriended, Marianne, is actually a talented singer. Although Marianne performs poorly at her audition, she is allowed to join the orchestra. Playing for the Nazis, however, robs the women of much of their dignity and most of them often questioned whether remaining alive was worth the abuse they constantly suffer.

There are no photos from this production yet, but if you have some and you wish to add them to the website, please contact us! 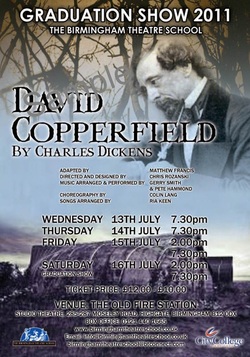 Synopsis: Now a grown man, David Copperfield tells the story of his youth. As a young boy, he lives happily with his mother and his nurse, Peggotty. His father died before he was born. During David’s early childhood, his mother marries the violent Mr. Murdstone, who brings his strict sister, Miss Murdstone, into the house. The Murdstones treat David cruelly, and David bites Mr. Murdstone’s hand during one beating. The Murdstones send David away to school.  Peggotty takes David to visit her family in Yarmouth, where David meets Peggotty’s brother, Mr. Peggotty, and his two adopted children, Ham and Little Em’ly. Mr. Peggotty’s family lives in a boat turned upside down—a space they share with Mrs. Gummidge, the widowed wife of Mr. Peggotty’s brother. After this visit, David attends school at Salem House, which is run by a man named Mr. Creakle. David befriends and idolizes an egotistical young man named James Steerforth. David also befriends Tommy Traddles, an unfortunate, fat young boy who is beaten more than the others. Read more... 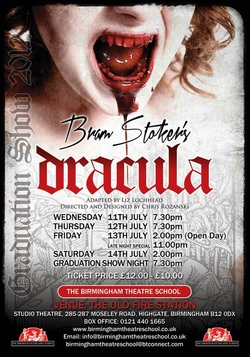 Synopsis: A young Englishman named Jonathan Harker travels through Transylvania on a business trip. He is there to aid Count Dracula, a Transylvanian nobleman, in buying an English estate. His journey into the remote Eastern European landscape is fearsome, although initially he is charmed by the Count's generosity and intelligence. Gradually, he comes to realize that he is a prisoner in Dracula's castle, and that the Count is a demonic being who plans to prey on the teeming masses of London. Dracula leaves him to die at the hands of three female vampires, but Jonathan attempts a desperate escape... 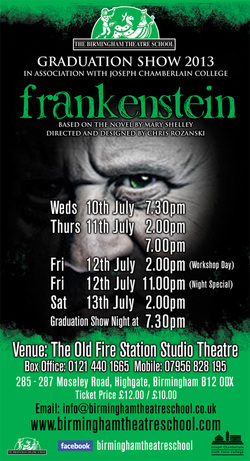 Synopsis: Immediately abandoned after birth, the childlike innocence of Frankensteins Creature takes on the world in a kaleidoscope of fear, loneliness and cruelty. Following the grotesque form of the creature, we learn of his search for acceptance, love and his own origins, determined to strike a terrifying deal. Questioning the very ideals of parenthood, scientific responsibility and cognitive development, 'Frankenstein' debates the very nature of good and evil within this deeply disturbing classic tale.

Synopsis: “It was The best of Times ,it was the worst of times”. Considered by Charles Dickens the best story I have written. A tale of Two Cities interweaves one family’s intensely personal drama with the terror and chaos of the French Revolution, in an epic story of love, sacrifice and redemption, as relevant to our times as ever.  This years grad show takes us back to an era of chivalry, gallantry and romance. It’s always a privilege to direct a Dickens masterpiece and this adaptation by Mike Paulton is the most recent incarnation of the story, originally adapted in March 2014 for The Royal Derngate and  Northampton Rep.

Click here to see photos from A Tale of Two Cities!

Synopsis:​ Our Countries Good : Australia 1789. A young lieutenant is directing rehearsals of the first play ever to be staged in that country-with only two copies of the text, a cast of convicts and one leading lady who may be about to be hanged… Winner of the Laurence Olivier Play Award in 1988. Now a cornerstone of modern British classics and a must for every actor training in the theatre. This year’s Grad show follows a great tradition of retelling classic stories in promenade format. Relive the Journey from England to Australia and witness the brutality of life of a bygone age. A company of 40 actors and a tale of woe and strive.


Click here to see photos of Our Country's Good! 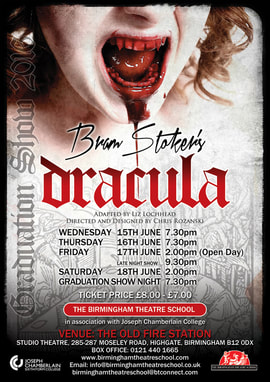